With the preliminary results in, it's worth taking a quick look at how the mayoral candidates' expenditures translated (or didn't translate) into votes. Here's a quick table and graph: 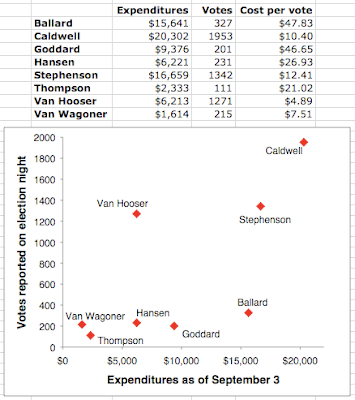 Disclaimers: Most of the candidates undoubtedly spent more during the final days before the election, and we won't know how much until the next round of disclosure statements is filed. The vote totals aren't final yet, either. Some of the expenditure amounts may also be misleading for various reasons. For instance, Van Hooser was able to recycle hundreds of yard signs left over from her earlier campaigns.
Note that expenditures are not the same as contributions, so these numbers don't match those in the previous article.
Posted by Dan S. at 8:55 AM 2 comments:

There is a wealth of information in the campaign financial disclosure statements that Ogden’s candidates filed last week. Press reports have focused on the total funds raised and spent by each candidate, as well as a few of the larger individual contributions. We rarely hear about the numerous smaller contributions. Are they significant?
This article attempts to answer this question in a visual way. For example, here is a graph that summarizes all the contributions received by all of Ogden’s mayoral candidates as of the disclosure cutoff date, September 3: 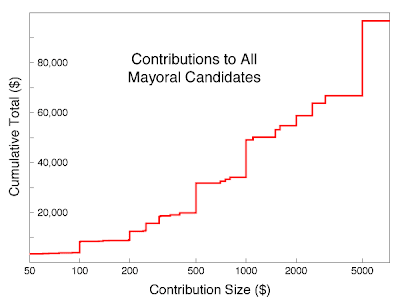 On the horizontal axis is the size of each contribution (plotted on a logarithmic scale that stretches out the lower end of the range, compared to the upper end, in order to show more detail). On the vertical axis is the cumulative total of all contributions that are less than this contribution amount. So, for example, contributions of $50 or less added up to about $3500 for all the candidates, or about 3.6% of the $97,000 total. Donations of exactly $1000 contributed $15,000 to the total, which was more than all donations of $200 or less.
The graph starts at $50, because candidates are not required to itemize contributions of $50 or less. The final jump in the graph is at $5000, the maximum amount that a person can contribute to any given candidate under the ordinance that Ogden passed in 2009. Contributions from a candidate to his or her own campaign (which are still unlimited) are not included in the graph. Multiple donations from the same person to the same candidate are treated as a single donation, but donations from one person to different candidates are not combined.
The good news here is that even the $50 contributions add up to enough to show up on the graph. Small contributors do indeed have a voice! But it’s disturbing that the six $5000 contributions add up to nearly as much as all of the contributions of $500 or less. When candidates feel beholden to a relatively small number of very large donors, ethical quandaries can easily arise. (The Ogden Ethics Project platform calls for a reduction in the maximum contribution size from $5000 to $3000.)
Of course, what you’re really wondering is how these contributions break down among the various candidates. So here, without further ado, is the breakdown: 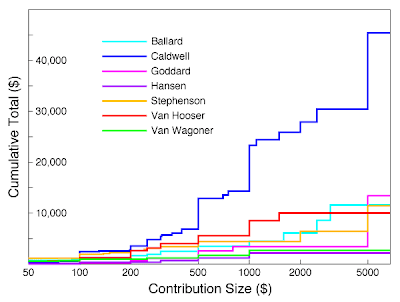 As the press has reported, Caldwell’s fundraising has far outpaced all the others, accounting for nearly half of the total contributions received. Goddard, Ballard, Stephenson, and Van Hooser are far behind Caldwell but surprisingly close to each other, while Van Wagoner and Hansen are far behind all of these. Thompson is not included in the graph because he hasn’t received any contributions, funding his campaign entirely on his own.
The contribution size distributions also vary widely among candidates. Caldwell’s bread and butter seem to be the $500 and $1000 donors, with his three $5000 contributions adding a rich dessert. Stephenson has received more than anyone else in amounts under $100, and is nearly even with Caldwell up to the $200 threshold. Van Hooser’s fundraising looks fairly strong in the middle of the graph, but then plateaus at the high end. Goddard is barely ahead of Van Wagoner until the two $5000 contributions from his parents are included, bumping him abruptly into second place.
For some interesting context, here is a similar graph for the two finalists in the 2007 mayoral campaign: 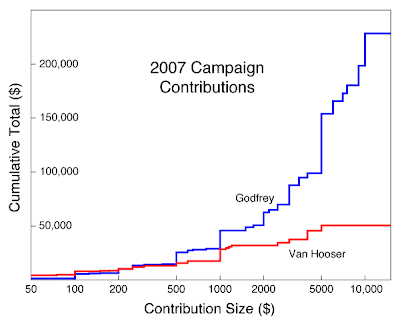 This graph includes contributions from the entire campaign cycle, so it isn’t directly comparable to the graphs above. Note that in 2007 there were no contribution limits, and nine of Godfrey’s contributors gave more than $5000. Note also the distinct shapes of the two lines, with Van Hooser receiving more in amounts under $250, but Godfrey receiving far more in amounts above $1000. Bear in mind, however, that Van Hooser was still able to run a very competitive campaign, ultimately losing the election by a margin of only 3%.
Tonight we’ll learn whether the votes are following the dollars in this year’s primary election. We hope, at least, that the unusually large number of public events has helped some of the less-funded candidates get their messages out to voters.
And what will happen in this year’s general election? Predictions at this time would be extremely foolish, given that we need only wait a few more hours to learn who the two finalists will be. Our hope, however, is that general election fundraising will not again be excessively dominated by the very largest donors.
Posted by Dan S. at 3:15 PM No comments: